This is my first gear review here at SoloDallas. Some of you have shown interest in practice amps and/or amps on a budget, so I thought a review of the Vox AC30 “amplug” that I own would be useful, including a couple of pictures and a sound test to give you an idea of how this thing works in practice.

A bit of background. The Vox AC30 amplug is a portable, battery-powered solid-state amp that plugs in directly to your guitar and provides a headphone output. It’s a convenient little portable amp. This is the first amp I owned – I purchased it last year right after I purchased my guitar. Since then, the line of these Vox amplugs has grown – they now have classic rock, lead, metal variants – but I have not tried any of them. My review will focus on the AC30 model.

What is great about this amp is that it’s portable, very easy to carry around. You can pretty much leave it plugged in to your guitar; if you often practice unplugged because you don’t want to be loud, or are not near an amp, it is quite convenient. For me, in the beginning it’s been very useful because I didn’t want to subject wife and kids to bad playing amplified – accoustic is suffering enough. For you, it might be useful in the same case. Or, if you are visiting your in-laws… or if you want to go out on Halloween trick-or-treating as Angus – strap on a portable speaker and let yourself go playing on the streets.

You can read more detailed specifications from their Web site, but long story short: the amp runs off two AAA batteries; has the guitar plug input as well as an “aux” input (e.g. to jam along an mp3 player), a headphone output, and provides three knobs (volume, gain, and tone). It costs about US$45-50 new. Here are a couple of pictures of it plugged into my guitar, and near the bridge so you have an idea of size: 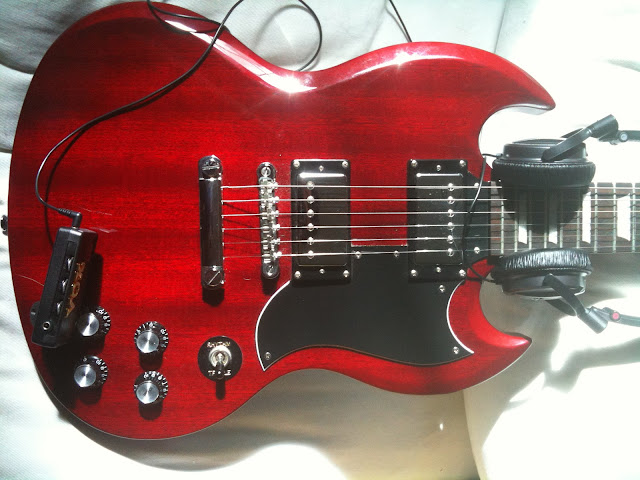 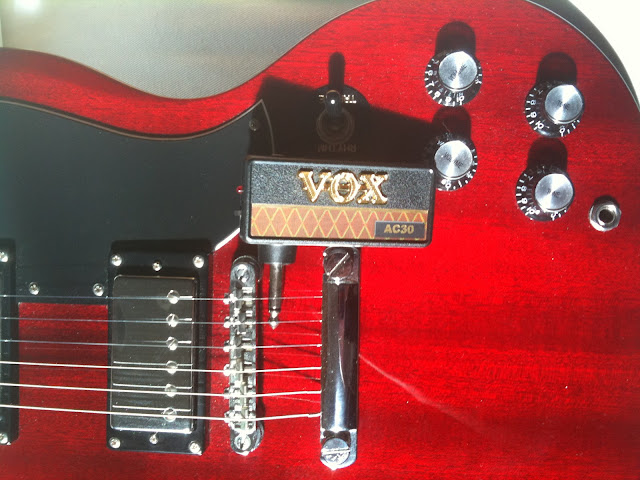 Tone-wise: of course, it’s not near any of the other gear featured here that keeps us drooling. But I think it’s pretty good for what it is and for how much it costs. I bought it without the benefit of being able to listen to it first, and was pleasantly surprised. Here is a sampling of some AC/DC riffs that I recorded to give you an idea of what to expect for the kind of sound that this community likes. The amp goes from clean to distorted with the gain/volume knobs, this sample focuses on just one setting that I used:

Click here to open another window and play sound samples

Very minor drawbacks: the knobs are a bit hard to adjust and to read the labels. Because it weighs more than a typical cable you plug in to the guitar, you need to watch out for it loosening the nut of the guitar’s output – not a big deal. There’s no indication when the battery is running out of juice. It’d be neat if they supported Bluetooth, getting rid of the single cable that is needed now (to the headphone); well, I guess you can always plug in a Bluetooth transmitter to the output of this amp.

Renato @ Florida; I bought and started learning to play guitar about two years ago, a bit late in life (I am 39). Still a beginner, but motivated and inspired by Fil and other 'bedroom rockers'. I've been posting a few videos here and sound bites on soundcloud, as sort of a logbook with snippets of how my playing (hopefully) evolves, and it may help inspire others who love music to take an instrument, practice, play, and have fun. To contact me by email, my gmail.com username is the same as my username here.