A Passion For Gear

23 Aug A Passion For Gear 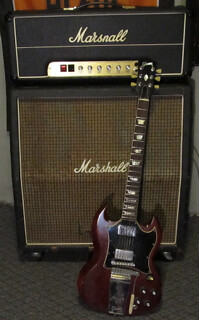 A passion for gear. Now before I get into the fun facts and knowledge about my gear. I would like to say few things about how I got to the point I am at today.

My guitar and gear journey started about 7 years or so ago. Before this I had no or little knowledge of a guitar or how to play one for that matter. It was a much older friend who inspired me to play and was just fascinated when watching him play and never thought I would have ever accomplished what I have achieved as of today. Guitar was not something that came natural to me like others but that never stopped me and I was determined to succeed.

Soon after my journey began I would meet a man who would take my playing to the next level and I am sure all reading this can figure this one out….(Fil).

If some one had told me 7 years ago I would be where I am at in my playing, and that I would be crazy about a little band called AC/DC, have a 1970 Gibson SG and a Marshall stack I would have told them no your crazy lol….

Here I am 7 years later. A stronger love for music, much more feeling and groove in my overall playing, and an addiction to a band that will rock your world any day of the week. So I would just like to thank Fil, and all the other great you tubers and now solodallas.com members that keep influencing guitarist from near and far in a positive way! Keep up the fantastic work and I know it is greatly appreciated.

Ok so now the part you have been waiting for the good stuff!

I never started out with this great vintage gear and had yes I had epiphones and what not but I was still never 100% satisfied with them. Now I am not saying epiphones and cheaper guitars are not great guitars because they are but after getting more into it and making it my new passion and searching holding out for the right moments and deals I knew what I wanted at least guitar wise at this point I now have my dream line up.

I just happened to come across a music store site when not intentionally searching for gear from a town near me which I had stopped in there store once before. I browsed there guitar inventory and seen this baby there and from the moment I saw it I knew I had to have it and with Angus Young now being my new music idol well why not right?

As you can tell by the 2 pics of it. The one on left being soon after I got it that there was some work and changes done. The guitar had schaller tuners, which I replaced to Vintage style klusons more so for the looks. The pick-up covers were missing and there not so easy to come by especially if you don’t just want any old year as there’s lots of early 60’s covers out there but after 1965 the covers switched from nickle to chrome so I purchased 1969 covers from a great guy I met online that sells vintage parts. Also getting a set of 69 witch hat knobs from him as it came with 70’s speed knobs as they just don’t justify the looks. Now the guitar is back to pretty much as original as it can get and yes the guitar still has the original T-top picks ups which recently checked the ohms. The neck reading 7.5 with the bridge 7.8.  Another thing I would like to mention is this guitar has had a professional heel repair which was done before I purchased it which I know Fil has talked about this before and issue guitars and how you can really get great guitars cheap and with a little work they can be good as new if not better. So don’t let things like a heel repair stop you. As any repairs if done proper are solid and will last.

Now at this point I have had my dream guitar for awhile but I find I am still lacking on the tone department and even though solid state amps and smaller amps are decent amps and can be especially for beginners. I found when trying to cover my favorite band and other great classic rock tunes I was never fully satisfied and after my first time playing my 70 SG through a friends tube Marshall I knew that if I wanted the tone I was searching and to finally have that sustain, feel and growl so many classic albums had. I would have to break down and find me a tube amp and with all the great discovery’s on solodallas.com for that elusive AC/DC crunch I thought a JMP model would do just that. So remembering having noticed one for sale from the times I was searching on this classified ad site for gear and that it had been up for months and with the price I thought something like this would have not last more than a few days or weeks. Well now was my chance so I jumped at it and got a really super deal on a 1979 JMP 2203 model which is the 100 watt master volume model.

Here’s a link that showcases my JMP and the specs of it more.

My third and final piece to get my rig 100% Vintage…..Well I started off having bought a pretty much brand new 1960A Lead cabinet a few weeks after I purchased the head as got a another great deal on it which had the celestion 75’s in them which are great and versatile speakers. Trust me guys deals are every where you just have to be patient and look hard. After having the new 1960 Lead A cabinet for just 2 weeks I noticed an add with no pics for a Marshall 1971 Slant cab. The only issue it stated was that 1/3 of the back had been cut out and it was a little beat up. I thought well for the price these issues are only small as just the speakers alone are worth more than what he was asking.

So I contacted seller and he sent me some pics taken with a phone and you can notice in the first pic that the middle 3rd of the back has been hacked out and not even a neat even cut at that. Which he told me was done even before he had it and my only conclusion to why someone would do this is for sound reasons and to allow more air around the speakers which you notice this on smaller amps and combo’s. The 2nd pic is a new piece of similar wood I found which I have made a new back piece out of.

Now the cabinet which after having received it and your probably wondering what speakers it had it. Well you will notice in the pic that on the back of the speaker there is a serial number which reads DG25 T1221. The date code being the DGT25 number. So how do I read this your asking yourself well I will tell you. Date codes from 1968 to 1991 are written in the form: Month, Year, Day. D being april and G being 1974 and 25 being the 25th. All the speakers in my cabinet read the same so the new finding since the speakers where made april 25th 1974 then the cabinet is not a 1971 but a 1974 which is still a great find none the less.

Here’s a link so you can see how to date more celestion speakers and years.

The speakers them self so what is in then.

The speakers in this cabinet are green backs…well not literately green in terms of color as your probably thinking well how can they be green back speakers if they don’t look green?  The actual term for these speakers are crème backs. Whats the difference your asking? Well from what I know so far is that in the late 60’s to early 70’s the speaker magnet covers on the back are green in color and some made of out metal which newer ones plastic. Then from the early to late 70’s the covers are a crème or greyish whiter color and then the late 70’s to early 80’s you have black backs which have black magnet covers although you might find other theses colors not in the specified year range as read they sometimes used other magnet colors when out of one color of plastic. Theses are all considered green backs and as far as the tonal differences in all them well I don’t have all these so can’t really go into that but I am sure you can find more information online if interested but I love the tone of the crème backs that I have and If I were to compare them to the newer 75’s I had for speakers right before this I would say theses are a tad brighter and a tad more treble but also seem easier and more clear on the ears which I love and they sound great for the classics.

Well this concludes all my vintage gear and information I know about it and I hope this was an enjoyable read that and you were able to learn some helpful information and tips when looking for your own gear. So I will end this article by saying thanks to everyone that has inspired me to play and learn, member Banane for all his hard work on the site and allowing me to post this article and then last but not least the more important inspiration. Fil 🙂

Hi everyone.... I am 23 and have been studying and learning the guitar for about 7 years or more and have really become attached to AC/DC and all classic rock in general and just can get enough. I recently fulfilled one of my dreams and purchased my dream Guitar a 1970 Gibson SG which I live to death and have yet to play a better guitar. Solodallas (Fil) has been a big influence in my playing and learning from the begining and now this site will keep the journey going. Rock On Fil :)